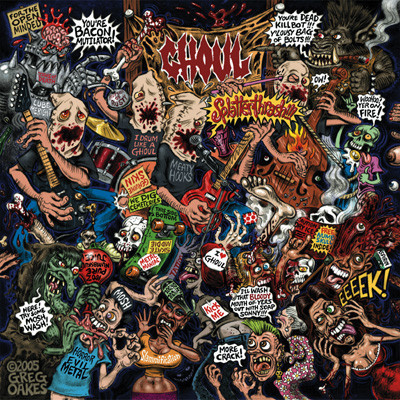 Obscene, cruel, and over-the-top, Ghoul's "Splatterthrash" brings a whole new level of enjoyment and a few great laughs to the metal community.

Ghoul should excite any fan of heavy music. Emerging from Oakland, CA in 2001, Ghoul has taken the metal world by storm with their fierce blend of death, thrash, and grind, but they do it in style. In the world of Ghoul, there are no serious lyrical topics, no taboo subjects; it’s all supposed to be taken light-heartedly (it’d be hard to take this seriously when the band members names are Cremator, Digestor, Dissector, and Fermentor). Their music has been called “the soundtrack to a B-Horror movie”, and rightfully so. With 12 songs riddled with obscene gore, hangover stories, and um…Killbots, Ghoul hit the nail on the head with “Splatterthrash”.

While they might’ve formed originally as a joke band (and as an appreciation to old school crossover), Ghoul quickly prove that while they’re here for a good time, that doesn’t mean they can’t play. “Into the Catacombs”, an instrumental intro, has Digestor and Dissector (the guitarists) showing off just how good they are with wonderfully chilling leads and melodies. Things quickly get heavy with “As Your Casket Closes”, especially when it becomes apparent that all of the members contribute vocals, which always keeps the variety fresh and unrelenting. It might actually sound like its one guy with just a good range in his grunts/growls/shrieks, but it’s really them just switching off. The main vocalist (Digestor) is the one you’ll hear the most, with his deep growls and throaty voice.

This whole album is just plain fun, so it doesn’t really matter if all of the songs sound the same. The guitar tone hardly changes, which is the main reason for the strong similarity between songs, but in the end, they’re all put together exceptionally well. Tracks like “Bury the Hatchet”, “Splatterthrash”, “Mutant Mutilator” all feature jack-hammer riffs and insane shouts, not to mention obscure lyrics, which usually go something like this: “ They spoke of a power contained in the skull, They said, it was brought from the stars. That thing we’d been using to crack open walnuts, Used to crack walnuts on mars? (Bury the Hatchet)”. When the lyrics aren’t just plain weird, they usually deal with detailed events involving gore and murder, but for the laughs, yet again. When there’s a song about having the “Gutbucket Blues”, where Digestor wails out about being hungover and not being able to find his shoes, there’s bound to be some chuckles. Or the just plain weird “Rise, Killbot, Rise!!!”, which all the awhile being surrounded by great musicianship and thickly-chopped riffs, cuts out every now and then to clips of a, um, Killbot as it boots itself up to, well, kill.

If you were to actually approach this album from a technical standpoint, it still wins. Every member is clearly adept at their instruments, most notably Digestor and Dissector on guitar. While most of their riffs are simple, hard-hitting palm mutes (traditional thrash style, if you must), a lot of the time, like on the almost hippie/surf oriented instrumental “Psychoplasm”, they’ll branch off with creepy variations (almost like music you would hear on Halloween) that are just gleefully evil. Not only that, but both are very ingenious when it comes to soloing, as they fit the mood of each song expertly. Cremator (bass) and Fermentor (drums) also have an exceptionally strong presence. Cremator’s bass is strong throughout, even with some fills of his own on “Life of the Living Dead”. Fermentor is just the same, delivering pounding pattern after pattern, especially on the title track which really helps the head banging come easier.

Everything about Ghoul’s “Splatterthrash” just screams for a good a time. The riffs, lyrics, and the just the songs themselves overall are worthy of repeated listens. The only thing that might irk a few listeners is the repetitive nature of most of the material. Once you get past that, however, it’ll become apparent that Ghoul has successfully created one of the more enjoyable metal albums out there, just because of the laid-back feel of it all.