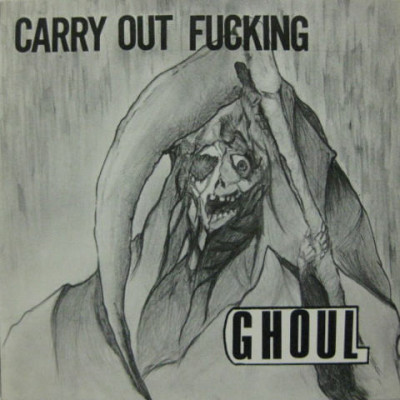 Fan club reissue of Ghoul's first EP from 1984. While this is a fan club release, like the recent Crow reissues it's one that was clearly done with a lot of care, attention to detail, and (dare I say it?) love. Anyway, Ghoul aren't one of the bands who get mentioned in the same breath as some of the heaviest hitters of Japanese hardcore, probably because they kind of fall in this little gap between the early Japanese punk sound and the burlier Japanese hardcore sound... like bands like G-Zet, they're kind of right on that line, clearly taking a lot of influence from GBH and Motorhead, but not really adding in the more straightforward hardcore (and even metal?) influences that would eventually coalesce into the Burning Spirits sound. It's such weird music, and the production values and the arrangements are so unique to their time and place... lots of these bands (Ghoul included) seem to be led by the bass player, with the bass right up front in the mix and carrying much of the melody, with vocals drenched in reverb and/or buried in the mix and the guitars hanging in back and holding down the rhythm. While it's not as catchy as G-Zet and not as harsh and aggressive as Kuro, the approach is similar to both of those bands, and if you're a fan of either and you haven't checked out this early Ghoul stuff you should get right on that. And if you don't know either, I suppose this is as good a place as any to start with this really unique time and place for music, which really has an embarrassment of riches for those who are willing to dig below the surface.