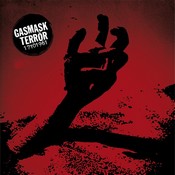 With nearly ten years of existence, Bordeaux Gasmask Terrör has become a reference in the French DIY punk scene. These D-beat activists have delivered a bunch of great records and tons of intense shows in Europe, USA and Japan. « 17101961″ was schedulded for their upcoming east coast US tour with Youth Avoiders and we were more than pleased when the band proposed us to take care of the European press of this new 7″. Gasmask Terrör carries on playing straightforward punk/hardcore with D-beat rythms and great riffing.
The lyrics are direct, insisive and politically engaged. They refer to French police exactions against Algerian people in Paris in the 60′s. This is nothing but a fucking great punk recordz !