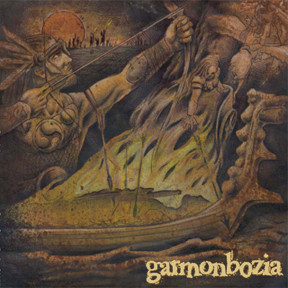 Wow, this is quite fucking good. Dirge laden hardcore/punk with a dark crust sort of edge, with seething female vocals and the use of cello to add a more haunting edge to their energetic attack. Apparently they get compared to Remains of the Day a lot due to their use of cello, but I absolutely disagree with that comparison. Writing-wise this is far more creative than Remains of the Day is, roaming from midpaced chord progressions and stuttered rhythms to driving melodic chords and thrashy picking patterns or chilling clean passages with the cello adding a really sinister undercurrent. Some of the more quirky riffing is definitely an acquired taste, but the harder hitting speeds have a lot of pissed off rage, with the vocals varying from all out screams to spoken passages or slightly lower backup shouts. Just check out the absolutely bitter vocal tradeoffs and surging power chords of "Hopes Turned Black". "Thor's Immortal Hammer", on the other hand, opens with a moody intro using thick basslines and clean guitars with prominent cello (honestly the cello really acts as a lead instrument on most occasions, which is great, and thankfully it's not so overpowering that it conflicts with the guitar parts or anything). "Hourly Wage, Hourly Slave" even starts out with a rather extended clean intro - probably the eeriest and most moving moment of the record, leading into a more midpaced and metallic affair with plenty of dissonant melody that makes for an excellent closing track (definitely the most powerful composition of the LP overall). The recording is pretty good. I hate to say it, but I think a slightly more polished sound would benefit them greatly, though. I know that a lot of bands of this nature tend to prefer a little rawness, and I'm fine with that, it works fairly well with the guitar tone on this one, but since the writing is very layered and can get intricate, added clarity and fluidity to the tones would sort out some of the details and let things really shine forth. I guess the end result is ever so slightly thin, the drums could use more low-end force and the guitars a hint more crunch, but they're on the right track for sure. I'm not terribly into the artwork, but it's alright. The front cover is okay, the lettering is definitely cool, and the bleak photo on the insert is very nice, but the back cover and the illustration underneath the lyrics aren't doing much for me at all. The matte finish is great, and the LP comes on sleek clear vinyl, but I think the overall visual aesthetic could be much stronger in relation to the force of the music. The lyrics, however, are very solid - taking on a mix of personal and political topics such as sexism and image consciousness, medication and mental illness, political greed and politicians' lust for power, etc. Some of the content is very pointed as well: "A 'strained' economy, the blame placed on welfare, Reform for the barnacles, pride for the poor, But if work is life, life is work, What's to be proud of? What value does it hold? All that you worked for your whole life - wasted! On your deathbed, what will you say? I wasted it away!" Good stuff. A very promising debut, and I'll be very much looking forward to their future efforts.