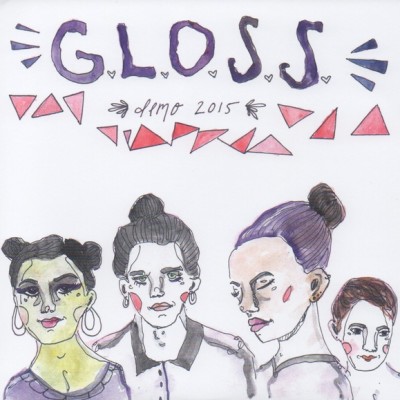 BACK IN STOCK!!! Without a doubt, one of the most hyped punk groups of recent years, G.L.O.S.S. are different in that they deserve the column inches 10 times over.  With an acronym translating as Girls Living Outside Society's Shit, the four piece from Olympia took the punk and hardcore world's by storm in early 2015 with their demo of blistering, stomping, meaty and breathtaking hardcore. Sounding not unlike Japanese hardcore pioneers Bastard mixed with prime Tragedy and even some wilder Italian influences, G.L.O.S.S. approach the punk status quo from the role of self-declared outsiders. Helmed by the immensely powerful vocals of Sadie Switchblade, the politically and hyper-aware lyrical content of the group set them apart from the staid pre-occupation of a predominantly macho and male hardcore scene. It's a testament the group's power and compositional prowess that, on the opening spoken-raged-word intro to their first wax statement, you can't help feeling enraged, pumped up and ready to destroy two thousand years of patriarchal culture before the first minute is out no matter your angle or political persuasion. We've been waiting for this for so long it already feels like the 7" of the year.