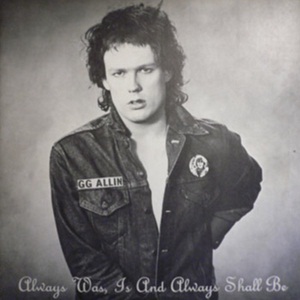 Always Was, Is And Always Shall Be (LP)

BACK IN STOCK!!! Always Was, Is and Always Shall Be is the debut studio album by American punk rock musician GG Allin, recorded and released in 1980 on Orange Records. The first three songs on the album which were recorded in 1978 and released as a single in 1979. The songs "Cheri Love Affair" and "1980's Rock 'N Roll" were first recorded and released as a single in 1979, but were re-recorded for this album.
Most notable, Allin's singing voice had not yet deteriorated. The music is of much higher quality in terms of both sound recording and playing than Allin's later output. The heavily New York Dolls and The Stooges-influenced music itself is a catchy mix of power pop and hardcore punk, like most of Allin's early material up until the mid-1980s.
Thematically, while the lyrics are often intentionally lewd and snotty, these songs do not represent the extreme antisocial and violent tone of Allin's later releases from the mid-1980s onwards (though they are somewhat humorous). Although he is indeed credited with playing drums on this album (credited as Kevin Allin), it is not known for which of the tracks he did.