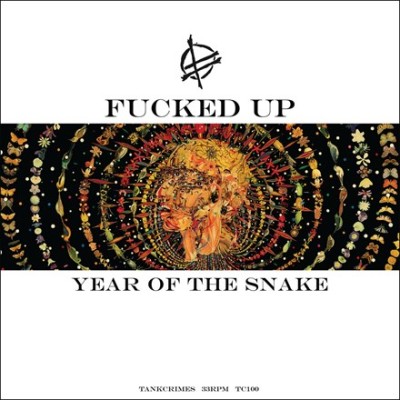 Year Of The Snake (LP)

Year Of The Snake is the eighth installment of the Zodiac Series from long-running Canadian hardcore punk collective Fucked Up. Fusing all the prime tenets of rock, punk, metal, and psychedelia into a comprehensive and imposing opus of unyielding enormity, Fucked Up is sonically and conceptually devouring in ways few bands can emulate. Following the releases of 2006's Year Of The Dog, 2008's Year Of The Pig, 2009's Year Of The Rat, 2010's Year Of The Ox, 2012's Year Of The Tiger, 2014's Year Of The Dragon, and 2015's Year Of The Hare, Fucked Up‘s latest entry into the Zodiac Series documents the journey of self-care and opening awareness through the use of psychedelics and medicinal plants. The 24-minute epic title track follows the narrative of a trip with strange instrumentation and electronics held together sonically with the bands own loose interpretation of hardcore punk.
Fucked Up have never been ones to shy away from epically lengthy tracks, and their latest is no exception. While some punk bands can make an entire album last 24 minutes, the Canadian hardcore powerhouses clock that in one song. “Year of the Snake” is the eighth single in the band’s Zodiac Series, following 2015’s “Year of the Hare” and 2014’s “Year of the Dragon”, and it makes up the majority of the Year of the Snake 12-inch EP.
As thrashing as the track’s first eight minutes are, the rest of it is actually a meditative piece inspired by band member Mike Haliechuk’s trip to Nepal. “It’s about how to die, or how to think about dying,” Haliechuk told Noisey. “Well, it’s kind of about how the process is within life. How you are constantly thinking about it and living it. Like how you are being reborn, reshaped, and how you can go thru something and come out the other end as something else.”