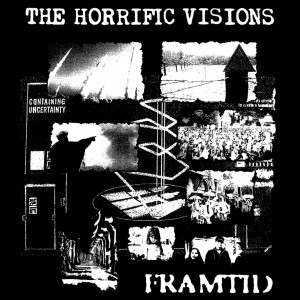 European press of FRAMTID's last release. Osaka crust legends FRAMTID return with the first recording since their line up change which brought a new drummer and bass player. As expected the "Horrific Visions" continues what the band started nearly twenty years ago: Their own take on classic early Swedish hardcore with and added over the top delivery, massive distortion and relentless drumming, all mixed with a really strong Anti War message. It is hard not to be infected by their sound as the aggression and song craft remain unmatched with B side opener "By Any Reason" showing a side of FRAMTID we hadn't seen yet mixing samples of war documentaries over a hypnotic more metallic slow paced song. Overall a fantastic release proving why they are probably the best band with black and white overexposed artwork and over-saturated guitar tone there is.
The record is pretty much identical than the us press other than coming in a pocket sleeve and have a different B side label.