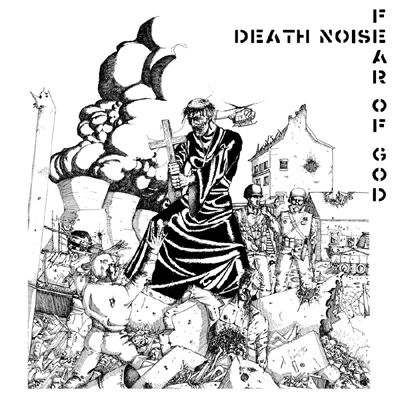 This is the story behind this special version of this legendary split LP: It´s not a new pressing, it´s still the original pressing from 1997 that stuck in the basement of the label owner for ages (S.I.S. RECORDS is dead). The LP´s were stored in cardboard boxes for nearly two decades now, the vinyl is in great condition but saddly all the covers got fucked (they are glued together and can´t be used anymore). To improve this special limited edition new artwork was used to print a new fold-out cover.

This split LP with two legendary Grindcore, Noisecore bands will please a lot of fans of EXTREME NOISE TERROR, PATARENI, BUKA, NAPALM DEATH, SORE THROAT, CRIPPLE BASTARDS … and if you missed the LP back then you´ll get another chance to get this nice release:

FEAR OF GOD from Switzerland is one of the first Noisecore, Grindcore, they started in 1986 and broke up in 1988 (in mid of 2002 the reunited for some time and played few shows), their sound was very extreme, raw and super brutal, really something new for most of the listeners in that time, their live shows killed most of the people in the audience. Here on this piece of vinyl FEAR OF GOD present four rehearsal songs recorded in the year 1988.

DEATH NOISE was an extreme Noisecore band from Marseille, France that started their career in the year 1985. Like their counterpart on this split, DEATH NOISE music is unbearable for a lot of listeners, brutal, raw and fast Grindcore, Noise beyond believe. The material on their side was taken from the “Enjoy Life …” Demo and from a live show at the Arsenal, Marseille (France) that took place on september 9th, 1987.

This split LP originally was released in the year 1997 on SOUND IST SCHEISSE RECORDS from Germany.