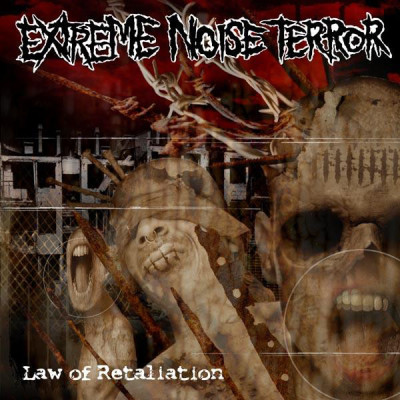 The best thing about this 2009 EXTREME NOISE TERROR CD is that it sounds like EXTREME NOISE TERROR — it's not a flirtation with death metal, there's no long songs or experimental tracks, and there's not an ounce of breathing space in this punishing mini-hell of UK metallic punk d-beat mania. If you're looking for a bunch of songs that roll in at under two minutes, decry the shit state of the world in the most angry, generic terms, rip through bare-bones riffs at 200 mph with a few screeching, flailing solos thrown atop as an afterthought, then this long-overdue return to form is gonna have your liberty spikes a-quiverin'.
Dean and Phil, the original vocalists, are both back behind the mic snarling and shrieking about social misery and political greed with a newly-reborn fervor that belies their advancing ages. The band, while treading long-familiar '80s hardcore turf, sounds juiced up and pissed off as well, throwing careening blast beats into the mix and sticking to a simpler-is-better formula when delivering their razorwire riffs. The whole thing sounds muddy, cheap and caked in gutter filth, which is as it should be, and it almost never lets up from the bap-bap-bap thrash polka beat, racing into crusty oblivion and dead-drunk on its own bilious anger.
A couple highlights: I don't know if it's an intentional homage, an accident, or a piss-take, but the beginning of "Screaming Fucking Mayhem" is lifted directly from S.O.D. classic "Milk", before descending into a minute and a half of the fiercest blasting on "Law of Retaliation". And "Death Message" isn't so much a song as a miasmic squall of feedback and noise, adorned with some angry ranting from one or both of our lads with the mikes. Other than that, though, it's pretty much working-class hardcore UK grind, the way you know it and love it, no mercy, no single and no apologies. I dunno if twenty-five years of this racket has done fuck all to improve the social condition of even one oppressed punter on this sick planet, but it's definitely great stuff to break your neck thrashing to.