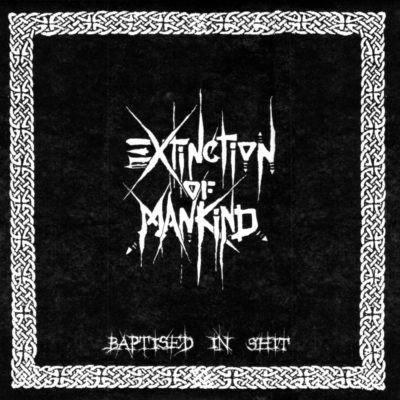 Reissue! - "Baptised In Shit" is the 1995 debut album of Manchesters crucial-crust institution EXTINCTION OF MANKIND. Reissued via Ruin Nation Records and available again on vinyl for the first time in 17 Years and for the very first time as digital download! Originally published in 1995 by Skuld Releases, written and recorded by the (semi) original line up you find the E.O.M. sound pointing more towards a unique combination of early 80´s UK Peace-Punk like ICONS OF FILTH with a heavy dose of ANTI-SECT influence but with a far superior 90´s production and a really heavy guitar-ridden sound that remind me quite a bit of CELTIC FROST.

Tracked, recorded and mixed 1995 at the legendary Whitehouse Studios by Martin Nichols who also took great care in remastering and adjusting the songs from the original DAT master for the digital download that comes with the vinyl.

We also restored all the original artwork and the package includes a 12" sized 6 panel folder with all lyrics as well as artwork by Squeal, Nick Blinko and Paul Smith. Also included is a B2 sized version of the Poster that came with the original pressing.