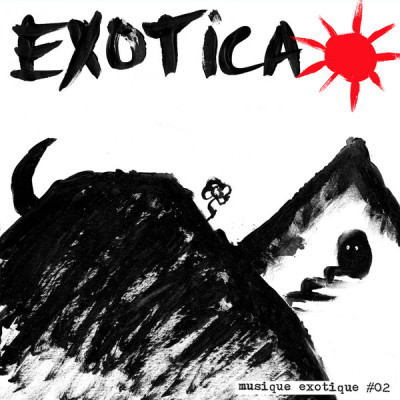 Sometimes the stones that remain unturned are the ones that are the least assuming. There is a kind of humour to the idea that music which sounds like rocks being thrown around in an oil drum being next to the name EXOTICA, but what else can we say for the gesture of learning how to turn real noise into real music? It’s exotic, it’s outside the expectation of what things are supposed to do. Getting to bark out your problems could soon be not much more than the memory of a luxury, so swim in it. This music sounds live, like EXOTICA could have trickled off of the back half of an abandoned CÓLERA riff on a lost practice tape, or if your favourite ARROGANTA AGITATORER ep dub melted in the sun on the roof of your apartment and fused with whoever was practicing piano on the floor underneath you. Gone are the attempts to reclaim the clean lines and false distress of industry for domesticity. Here is a tiny pair of legs walking through a disgusting dirty world, gathering dust. The sun may set, but the moon also rises.
Music Exotique Volume Two comes housed in a heavyweight sleeve designed by bass player Santiago Melchiorre and vocalist Lauren Gerig, recorded by the band themselves, and was skilfully mastered by Will Killingsworth at Dead Air Studios on a cold evening.