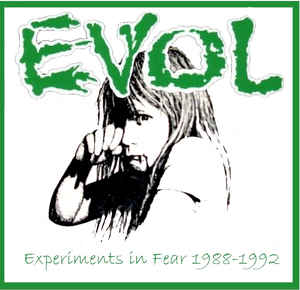 Moshover Records is proud to announce the long-awaited vinyl-release of Evol’s complete studio-output!
Evol was raised 1988 in the scene of No Mercy, Suicidal Tendencies, Excel, Beowulf, Uncle Slam and Cycotic Youth. And they were really deeply connceted in that scene:
Prior to Evol the bassist was jamming with No Mercy and his youth-friend Dan Clements of Excel connected him with the founding guitarist from Santa Monica. After Evol he played bass for Beowulf.
The singer became Jason Brown, former singer of Cycotic Youth and currently running ST Tattoo-shop with Mike Muir.
Some of the artwork was done by Ric Clayton, of No Mercy and Suicidal Tendencies fame.

Connected with those bands, they played too that famous Venice Crossover style. The perfect mix between professional played Hardcore and Thrash Metal.
They released 3 high quality demos between 1988 and 1992, but strangely never got a record-deal back in the days. After a self-released CD in the early 2000s and 2 songs on the Farewell to Venice compilation LP, now at last their complete studio-output is available on wax. Remastered for the best vinyl sound, to bin those crappy MP3s that are floating around. 8 song album on green 10", with lyrics, info, art and fotos on the printed innersleeve.