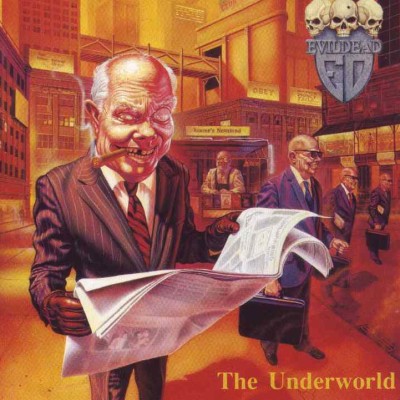 The Underworld is an aggressive release from a brutal thrash band. That may sound spectacular, but nevertheless it becomes repetitive and stale at times. On this record their sound is similar to Demolition Hammer, but better in the sense that they're slightly more melodic. By melodic I mean there's actually some effort put into their music. They don't have the melody of Iron Maiden, but it's not cacophony like a lot of grind and death metal arethese days.

It begins with an intro(just some noises) that you will learn to skip through after its initial hearing. The album really picks up with Global Warning. It's an intense song with a killer riff. Branded is good, maintaining the deadly sound. The entire band is obviously adept with their instruments, and for some reason the percussion seems rather powerful. The songs have strong riffs throughout most of the album. When judging the vocals I notice they’re more deep than previously on Anihilization Of Civilization. The Underworld(the track itself) is just alright, nothing astonishing. By the time you reach track seven, the album has lost its edge. He's A Woman, She's A Man could have triggered a 180 degree turn around in the right direction, but the title and lyrics ruined any chance. Even with a good riff and chorus, I still have to ask what the hell are they singing about? I'll assume it's their way of messing around. Labyrinth Of The Mind is a terrorizing song, one of my favorites on the album.

The Underworld sounds more thrash than Annihilization Of Civilization. Not to say that their first release isn't within the thrash genre, it's just that The Underworld lacks the speed metal influence, and has slightly slower riffs. Yet, I can't determine which is more quality. I guess I'll say The Underworld, but barely. To put it simply: this is good thrash. If you like bands like Demolition Hammer go for it.