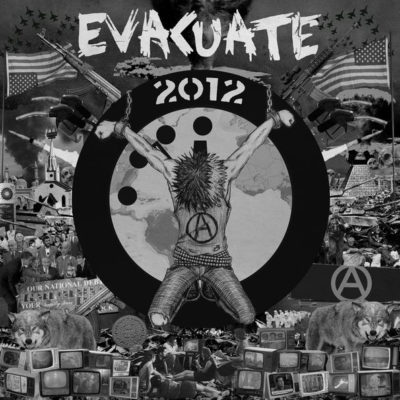 Pretty high-energy elements at play here. Crust that toes the line with more “traditional” punk. Their visual aesthetic is heavy on military stencil fonts and cues from Profane Existence, but many of the melodies and the fact that the vocals are almost entirely discernable (a nice touch) brings to mind, say, the Vibrators or the Skulls: solos that almost get out of hand but don’t and a recording that packs a punch without sounding glossy. The LP jacket folds out into a six-panel poster, with the interior being a crazy collage/art piece of the world shooting itself with a pistol. There’s also a nicely inspired plea from the vocalist regarding a commitment to DIY as a viable, grassroots solution to a lot of problem facing punk, whether it be in clubs or via downloading. I initially figured it wouldn’t be my thing, but it grew on me exponentially with each listen. A surprisingly impressive outing and one that’ll probably get repeated listens around here. These dudes should be on butt patches all over town.