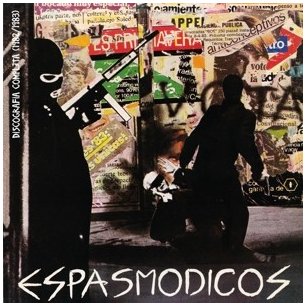 Reissue of ESPASMODICOS complete discography in one LP. First wave hardcore punk band that along TDK and PANADERIA BOLLERIA NUESTRA SENORA DEL KARMEN were the avant garde of Madrid's Hardcore. Espasmódicos were formed in the Malasaña council, Madrid in the first days of 1981. J. Siemens (guitar), Kike (voice) and CSG71 (bass) were the first line-up, completed when Carlos Torero joined them as a drummer. Influenced by the first punk Hardcore bands coming out but also for some rocking elements, soon the first tracks were composed and then, in 1982, the mighty DRO label released their first 7" called "Recomendado para molestar a su vecino", featuring 3 songs that are one of the seminals steps into punk in this country. Since the 7" was released the band started to be well known and they went to some Spanish TV shows to promote their work. Carlos Torero decided to leave the band and a studio-session drummer joined in the person of Carlos de Yebra. In 1983 the band recorded their last songs: first they registered the mighty tracks that went on to the great compilation "Punk, qué punk?" released by DRO. These songs were "Tía, vete a cagar" and a free cover-version from Sex Pistols called "Belsen was a gas", something that pointed the band to a weird status as the lyric was something into Nazism or fascism, something that the band never were. The second studio session for that year (and the last ever for the band) was to record their maxi-single "Espasmódicos", five songs together with the great art-work done by J. Siemens and Kike Kruel, very similar to the Crass's stuff and so. Beat Generation, absolutely fan of the band, is more than proud to release this LP with all their discography, together with a replica of the art-work.