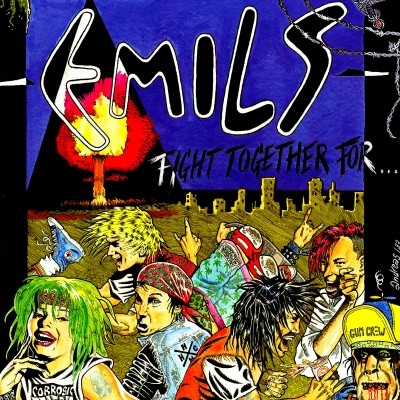 In the mid 1980s some german bands began to be more inspired by american hardcore punk. Bands like SPERMBIRDS, SKEEZICKS, JINGO DE LUNCH, H.O.A., UNWANTED YOUTH, S.O.S., ... and EMILS from Hamburg. There was all kind of rumors that actually the well know legendary hamburg punks from "SLIME" where fitting behind the "EMILS" moniker. If you read the band name from the back to the front, then these rumors get pushed but of course, that was nonsense.
The EMILS crossed on their debut album Hardcore Punk and with bits and pieces of Metal. D.R.I. had just invented the crossover and the influences from the states were quite big on the local punk-scene. The EMILS quickly became popular. Lyrics sung in german and dealt with all kind of topics, sometimes critical, political or just fun…the church, neo nazis, chernobyl just had gone off… songs about conformity and the stupidity of the scene, which was expressed in the song "Dumb Punk".
"Fight together for ..." was originally released in 1987 and perhaps for many people the first and best EMILS LP ...
The vinyl reissue includes a bonus EP with 4 previously unreleased live cover songs, as well as a 12-page booklet with liner notes / pictures.