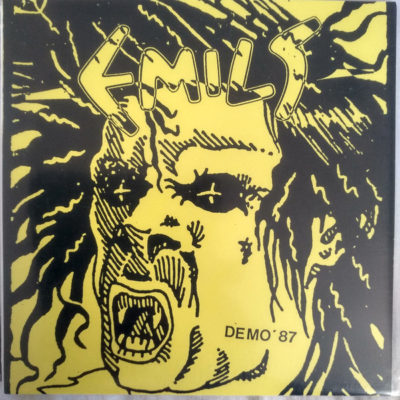 Limited repress in compact white vinyl. 300 pressed copies pressed. The mid-80s there were these rumors about a new band from Hamburg. Were behind the EMILS perhaps SLIME? If you read the band name from back to front, then these rumors get natural food. And the spelling of the band lettering was very inspired by SLIME. But in the end that was nonsense, of course. There were no overlaps. The mid-80s began the first german bands to orient themselves on Ami-Hardcore. SPERMBIRDS, Skeezicks, Jingo De Lunch, H.O.A, UNWANTED YOUTH, SOS. The EMILS crossed on their demo hardcore punk and also metal. D.R.I. had just invented the crossover. The EMILS quickly became popular. Also because they had German lyrics, which were also very critical and directly and did not mince his words. They were directed for example against the Church, Neo-Nazis, nuclear power (Chernobyl was just explodes), compliance and also against the stupidity in the own scene. Early 1987 they recorded the legendary 5 track demo at the "Dissenter Studios". The limited repress comes in a different inside cover artwork, and also you will get additional sheet with information from different old show flyers.