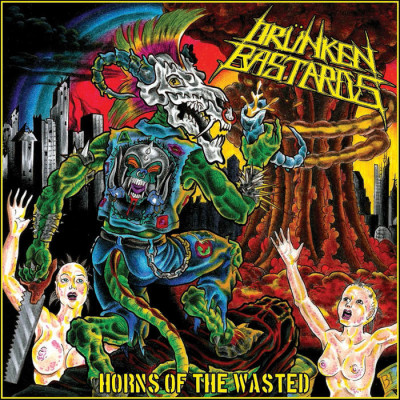 Horns Of The Wasted (CD)

Baptized in speed and blood, the toxic oil of the 1980's is pumping in the veins of DRUNKEN BASTARDS! With their second album Horns of the Wasted, these hungover Hungarian's blitz the senses with galloping hardcore punk and evil blackthrashing metal, taking all the vilest aspects of the '80s underground and warping 'em into diabolical anthems. Too metal for punk and too punk for metal, DRUNKEN BASTARDS are posercrushing road warriors existing in a no-man's land... and they don't give a fuck as long as they're on the Horns of the Wasted! Expect NO sweetie melodies and NO gushy lyrics, just pure metal exekution straight from fuckin' hell.
FOR DIE HARDS OF: Barbatos, Venom, Driller Killer, old Sodom, Broken Bones, Abigail, and early Kreator.