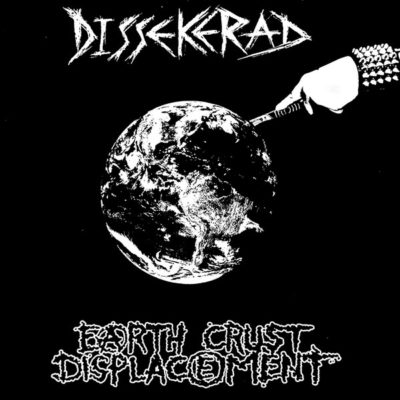 We are happy to present you another swedish/german jointventure. Two of europes most active bands in releasing bullshit, noone needs with another beautiful raw noize split 7inch. Dissekerad with members of Totalitar and Makabert Fynd delivers two new songs, recorded in 2019. You know what to expect: high end classic swedish Hardcore Punk with stupid dope hypnotic riffs on a rollin D-Takt, lovely straight forward in your face as you need it. Earth Crust Displacement with another 2 songs recorded in 2016 from the session from the well known "D-Takt Noize" LP. Raw, brutal, noisy and distorted as fokk. In case you don’t remember, Sweden’s Dissekerad comes from the broader universe of Totalitär-related bands, and along with members of Makabert Fynd features Poffen from Totalitär’s trademark vocals. You won’t find any surprises on this side of split (not that you’d want any!), just catchy, well-constructed d-beat in the vein of Sin Egen Motståndare-era Totalitär. As for Germany’s Earth Crust Displacement, their two tracks come from the same session as their D-Takt Noize LP from 2017, and while I haven’t heard that record, these two tracks are solid, Totalitär-style d-beat that’s a hair sloppier and noisier than the Dissekerad side. The drummer has a penchant for long, insanely fast snare rolls, putting them at the end of nearly every bar. With straightforward d-beat it’s all about a band’s particular quirks, and at least for these two tracks that seems to be one of Earth Crust Displacement’s signatures.