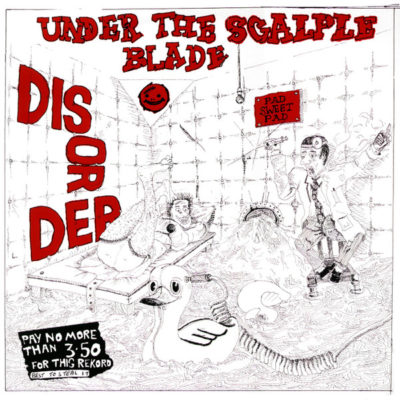 Under The Scalpel Blade (LP)

Radiation Records present a reissue of Disorder's Under The Scalpel Blade, originally released in 1984. Bristol punk pioneers Disorder formed around 1980, during the second wave of UK punk rock. Their approach to DIY ethics was so deep that they decided not to sign to Riot City, but to create a label of their own, for a bunch of classic singles the average distortion level of which led BBC DJ John Peel to describe Disorder as sounding like "shit". In fact, unlike many contemporaries like Crass or Conflict, Disorder showed no ambitions in stylistic experimentation: their debut LP Under The Scalpel Blade is one blast after the other of pure rage, packaged in two-minute bursts of hyper-speed drumming, distorted guitars, and screaming vocals. Remastered audio and double-sided lyric insert.