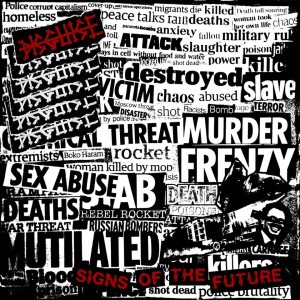 Signs Of The Future (LP)

Dublin, like New York or London, is a city whose punk in 2015 matches its vibrancy with its refusal to be defined by one sound. Multiple bands, all with wildly divergent takes on 2015 punk, all unified in their DIY ethic and refusal to compromise. The first 12" from searing rawpunx Disguise (who also feature 2/3 of Zom and members of Strong Boys) continues where their System Shock 7" left off, slamming together the lithe turmoil of Gloom, the monstrous purpose of Bastard, the ugly burn of Crude SS into a violent driving gunk, like Florida's Mauser or Australia's Kromosom, taking that Scandi-Japanese rawpunk axis and stretching it out to their own corner of the globe.  Built on a relentless sinister thrum, a taut propulsive clatter, Disguise explode with scalding fury in the screaming guitars and tortured barks and roars echoing out of the radioactive slurry. From Constant Victim pure vitriol rolling into Signs of the Future's noisestomp groove, to Depleted Uranium heady crash and BBFM's broken fade, this is ferocious hardcore punk, worked til its end. (Joe Briggs).