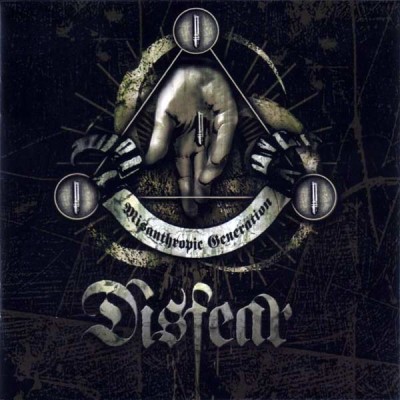 BACK IN STOCK!!! Black vinyl! The record comes in a nice heavy cardboard gatefold.
Those not familiar with Disfear should be ashamed of themselves - you probably have been hiding under a rock for more than 25 years.
Starting out as yet another Discharge inspired Dis-band from Sweden, they released a monumental debut album back in 1992 along with producer Tomas Skogsberg.
In the years, Disfear became one of the only real survivors of the Dis-scene, and even though many line-up changes plagued the band, they kept on going until they left Osmose Records in 1998 - at which point they had incorporated ex-At the Gates vocalist Tomas Lindberg in the band.
Instead of calling it quits, the band had five years to work on new material, and Relapse made them an offer they couldn't refuse, resulting in "Misanthropic Generation".
Swedish hardcore in its purest form, "Misanthropic Generation" is a maturation, modernization and perfection of Discharge's music from back in the '80s. With a blazing pace, Entombed-ish guitar/bass riffing meeting the banshee vocalism of Tomas, supported by wickedly groovy Motorhead-style drumming - masturbation for the mind, one might call it.
Well adapted to the sound of the new millennium, the twelve songs on this album (mostly clocking around three minutes) are a firm reminder of the past as well as an excellent look into the future of hardcore: "Misanthropic Generation" is a must-have for those who loved Discharge way back as well as those who claim to have an interest in the Swedish hardcore scene.