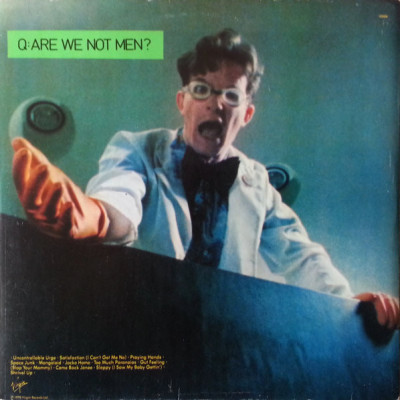 BACK IN STOCK!!! Q: Are We Not Men? A: We Are Devo! is the debut studio album by the American new wave band Devo. It was originally released in August 1978, on the labels Warner Bros. and Virgin. Produced by Brian Eno, the album was recorded over a period of four months between October 1977 and February 1978, primarily in Cologne, Germany.
The album received somewhat mixed reviews from critics and peaked at No. 12 on the UK Albums Chart and No. 78 on the U.S. Billboard chart. Recent reviews of the album have been more uniformly positive and the album has charted on several retrospective "best of" lists from publications including Rolling Stone, Pitchfork Media and Spin.
On May 6, 2009 Devo performed the album live in its entirety for the first time as part of the Don't Look Back concert series curated by All Tomorrow's Parties. On September 16, 2009, Warner Bros. and Devo announced a re-release of Q: Are We Not Men? and Freedom of Choice, with a tour performing both albums. This is an essential record that you can't miss in your record collection!