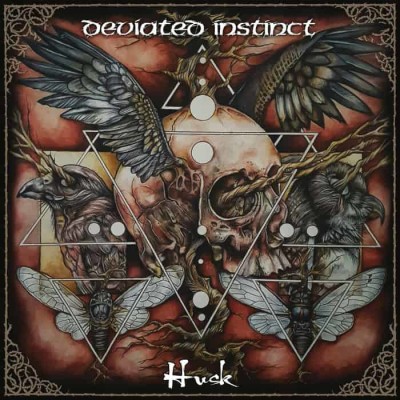 Following the same path as its predecessor six years ago, “Husk” was released in November 2018 to state that Deviated Instinct’s story is not over yet. With four tracks that range between four to six minutes each, “Husk” is an epic convergence of styles that transcend the boundaries of punk and metal.
The new record seamlessly fuse atmospheric guitar driven passages and meticulously crafted anarcho-punk lyricism with death metal hooks of chugging mid-paced riffs and double-kick rolls, resulting in a considerable force to be reckoned with. They know how to mix up the things in a dynamic way creating a perfectly balanced crossover that sounds legit in 2018, something that many other reformed bands have failed to achieve recently.
True to the DIY ideals, “Husk” was mixed and recorded by Bri Doom at the legendary anarchist social center 1 in 12 Club in Bradford. The mix was then mastered by Brad Boatright at Audiosiege, culminating into the cleanest and most monolithic sound in Deviated Instinct’s discography. The band has started Terminal Filth label in 2012 to self-release their newest material and it should be also noted that they still continue to craft their artwork on their own.
Back in the heyday of the rise of crust, Deviated Instinct was among the first bands to blend Celtic motifs, gloomy and demonic black’n’white imagery with the anarcho-punk politics in a coherent way. Guitarist/back-vocals Rob Middleton, aka Mid, is once again responsible for the stunning workmanship of their releases. However, the black-and-white aesthetics of the late 80s were changed into a full-colour artwork more along the lines of bands like Neurosis and Kylesa, representing the new beginnings of Deviated Instinct in the contemporary DIY scene.
While Deviated Instinct are still firmly grounded on the foundations of crust, stench and death metal they built on, they aren’t stuck in nostalgia but rather putting some sturdy efforts to sound relevant—both politically and musically—in 2018. “Husk” is a great comeback for a legendary band that have never got the recognition of Amebix but are right there next to them in shaping the crust to come.