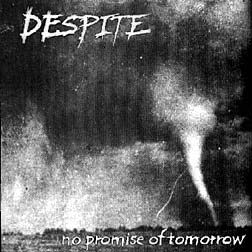 No Promise Of Tomorrow (LP)

11 tracks of ultra heavy crust/grind in just about 18 minutes worth of running time. No bullshit, no filler just 11 powerful tracks that will kick your teeth down your throat. These guys sort of remind me a bit of His Hero is Gone mixed with some Disrupt and a bit of Napalm Death in there for good measure. The songs are pretty much fast, straightforward crust anthems with fast as hell drumming and devastating riffs that just tear through your speakers. Every now and then they toy with some interesting riffing styles that really make the listener take notice. The way the first riff starts out in the track "Dependence" almost sounds a bit sludgy and then it speeds up and shifts into a vicious crust assault. They pull out another little neat opening riff at the beginning of the title track, which is oddly melodic before they kick the speed up a notch and some snarling vocals come into play. I really dig the vocals on this record ranging from deep death growls, to high pitched screams and more traditional pissed off shouting. The death growls take center stage and sound great, really adding an extra element of heaviness to their overall sound. In fact the whole vocal delivery is what gives the album its grindcore edge and I've always dug the hell out of that whole crust/grind mixture. Top notch disc in every respect. If you dig crust and grind, then Despite should be right up your alley! Great stuff.