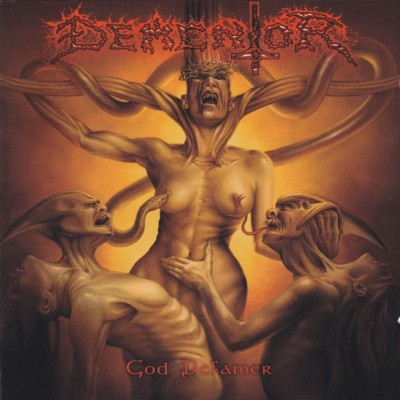 Blasphemous CD title, band logo shaped by letters that look more like guts and the old time classic reversed cross, a misshapened mean beast with a garland of thorns on it's head (gee guess that symbolizes!), cannot signify a band that specializes in A.O.R. and composes songs for lost loves and broken hearts.
That's right…hyper-brutal Death Metal with a clear reference in it's lyrics to the eternal opponent of Christianism and not to broken necks, rotten skulls and moth-eaten eyes, as most bands of the genre do.
Dementor is Slovakian but the compassion they show for Vader could easily render them Polish. Personally, I rank them higher than their veteran 'compatriots' as they seem musically more varicolored than Mauser's companionship. They strike pitiless, ceaselessly, with outrageous accuracy and admirable bestiality. I bet that someone was keeping them for years locked up in a dungeon far away from any ray of light for how else can I explain the fury possessing them? Their drummer either has 3 feet and 8 arms or takes shots of naphtha and nuclear hormones. It seems more logical to me that instead of drumsticks he must be carrying steel hammers. The vocalist's flat and abrupt accent might deprive in expressiveness, but it helps the band to sound 100 times more savage and primal. The majority of songs easily compete the speed the blink of an eye has and everything to some extent will satisfy all those who sympathize to 'noble' hearings. The chaotic situation that surrounds this release reminded me a bit of Origin and any of you who've heard this band are probably peeing your pants right now with joy. Surely they don't reach the dementia and genius of the forenamed, but nonetheless they remain a fine alternative proposal in the field of extreme metal.