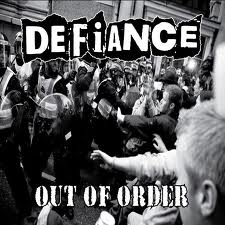 Out Of Order (CD)

Portland’s Defiance are back to the attack with their fifth full length album on Unrest entitled Out of Order!! Going back to their anthemic roots of aggressive dual shouted anarcho street punk, Defiance’s Out of Order is the perfect soundtrack to an old fashioned police riot!!
Fortified w/ Kelly Halliburton back on the bass, and second guitarist Brian ‘Hopper’ from HELLSHOCK, this ten song album was recorded in 2008 by their drummer Brian ‘Paine’ + subsequently mastered by Jack Control of Mind Control Records notoriety. The record album comes in a gatefold jacket, with a LTD. 200 DIEHARD copies, which include a Japanese OBI strip, transparent blue colour wax, and a Japanese translation sheet for the Far East folks!! Defiance has touring dates for Europe in June 2011 followed by USA dates in the fall.
Another classic record from the All Stars of PDX Punk!!