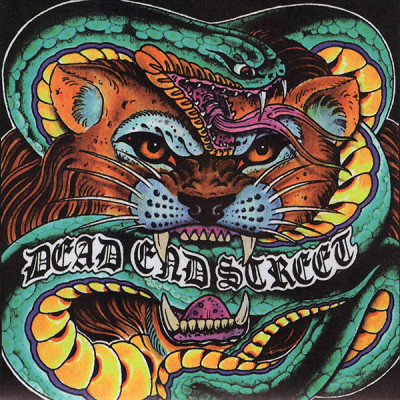 A band featuring ex-members of bands such as Payback and Colonna Infame who just saw their debut EP being released by Aggrobeat Records and Hellnation.
While the earlier mentioned bands like to sing in their native language Dead End Street sticks to English with the four songs on their self-titled EP. This makes the band sound a little less exotic but understandable, which is always a good thing.
Musically the band says to be influenced by bands such as Rose Tattoo , The Wretched Ones and The Business. Altough I don’t hear much of the self-claimed The Business influences I can definitely hear back their other influences. Just think of Rose Tattoo in a faster pace without the Australian influences and a dose of The Wretched Ones and you got Dead End Street’s sound, not bad at all if you ask me!
All at all this is a pretty cool EP, nice artwork, excellent songs and from what I understand this is going pretty fast because recently a extra 100 copies got pressed on yellow vinyl. So if you want one you might want to act quick before they’re gone forever!