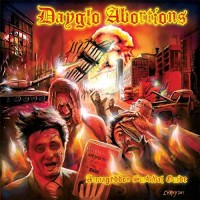 Armageddon Survival Guide is 14 songs in 25 minutes, with no room for filler. Even the shortest tracks are razor sharp slices of punk aggression. It’s not at all politically correct, and that in itself is fairly refreshing in this day and age. It doesn’t shoot for overt comedy, like some of the band’s previous work, but there’s still plenty of black humor. It doesn’t take itself too seriously, but still manages to address serious issues. It’s angry and hostile, antisocial and antagonistic. In other words, it’s everything a great punk record should be. This is another record that we really needed in 2016. It’s a big fuck you to the system.