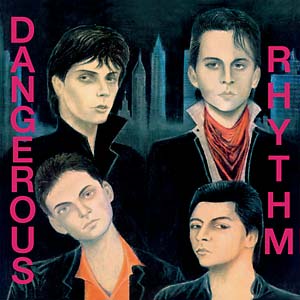 Dangerous Rhythm formed in Mexico in August 1978 and can claim to be one of the first punk bands in the country. Piro, the band's vocalist, immersed himself in the whole Los Angeles scene, and was in contact with the Chicano side of the city through Tito Larriva from The Plugz and other bands from the area like Circle Jerks, Fear, and Black Flag. The impact of punk classics like the Sex Pistols, The Clash, or the Ramones obviously had an influence on the sound of the group. Dangerous Rhythm never forgot their family tree, absorbing large doses of unconventional rock like the New York Dolls, The Stooges, and Lou Reed. All these elements helped the band forge their own style and sound, starting with songs sung mostly in English and vibrant, direct melodies. After laying the foundations of the non-existent punk scene and recording their debut, Electroshock, they released their first eponymous LP in 1981. It was released by Hip 70, a label run by Armando Blanco, who owned the club of the same name, which was the focal point of the Mexican scene in the '80s. Key figures of '70s counterculture like Ricardo Ochoa (Peace and Love, Nahuatl) and veterans like Max Reese (sound engineer for Tom Petty) collaborated on the recording, which was then mastered by Wally Traugott, who worked on the live album The Beatles at the Hollywood Bowl (1977). The end result was mind-blowing and shows a band with nerve that played new wave with a punk rhythm. This first vinyl reissue is pressed on 180-gram vinyl and features replica cover art and insert plus a new article written by Piro. Edition of 500.