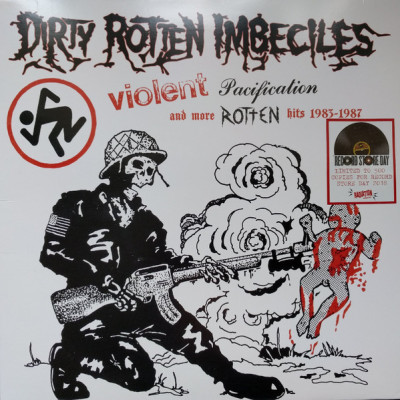 BACK IN STOCK!!! Formed in 1982 in Houston, TX, original hardcore skate punkers DIRTY ROTTEN IMBECILES debuted with a S/T single, fitting 22 songs into 18 minutes on a 7" EP. Often mentioned as one of the inventors of the 'crossover' sound between punk and thrash metal, along with such acts as Suicidal Tendencies, Crumbsuckers, Corrosion Of Conformity, but also Slayer or Metallica, DRI's first lp Dealing With It is a pure milestone of extreme metal, and their follow up from 1987, simply titled Crossover, defined the last details for the creation of a whole subgenre of heavy, inspiring young kids who would later form bands like Biohazard or Rage Against The Machine. This early days' retrospective includes hits and rarities spanning from their hardcore days to the more contaminated, including all time classics such as Couch Clouch', I Don't Need society' or Commuter Man'. RELEASED IN A LIMITED EDITION OF 500 COPIES.