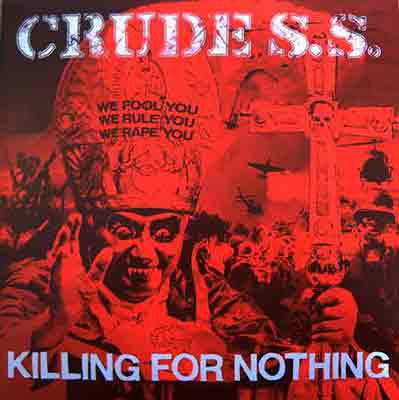 Killing For Nothing (LP)

Crude S.S. was formed in Sweden back in 1982, with their first self-released demo, and rapidly became one of the pioneers in the F.W.O.S.H.C. (“First Wave Of Swedish Hardcore”) along with seminal acts like: Anti Cimex, Absurd, MOB47, Etc… by the time the S.S. was later added, since they felt Crude was a bit empty, and caused some confusion at the time, before people knew it stood for Crude Society System. They began to play several shows with an onslaught of various Swedish punk bands at the time, incl. the now legendary Finland tour with Anti Cimex. They quickly gained a name for themselves but primarily among their own community in Sweden. It wasn’t until late 1983 they reached a broader audience with the release of their eternal classic EP “Who’ll Survive”, also appearing on the now legendary compilations “Cleanse The Bacteria”, “Bollox To Christmas”, and “Bollox To The Gonads”.

They fit in well with the established lot of Swedish hardcore punk of that time, although they managed to create a sound on their own which was somewhat unique at the time, still fast and aggressive, harsh vocals, shifting from slow and sludgy and unrefined anger defined the Crude S.S. sound, picking up influences from the early thrash like Celtic Frost/Hellhammer era crossed with Discharge, Venom, and Motorhead.

Crude S.S. have definitely earned an eternal name for themselves among the international DIY hardcore punk community and have served as significant influence for countless bands from all corners of the globe.

Very little is known about the time of their official break up as a band but the last official compilation album that they appeared on was released in 1986, thus leading one to believe this to be the approximate time of their final days. With very little available or even existing, in terms of official releases, they are easily one of the most bootlegged bands in international hardcore punk history next to the likes of Anti Cimex, Mob 47, and Confuse (Japan).

Track list:
Side A:
A1 Who’ll Survive A2 Nazi Go Home A3 Respect The Earth A4 Blue Eyed Devils A5 You Can’t Deny It A6 Forced Values A7 Vad Jag Säger Och Vad Du Gör A8 Chaos A9 Sick Pleasure A10 Grillad

Side B:
B1 Ingen Skola B2 Bullying A Nation B3 Spräng Alla Kommunhus B4 Gud Som Haver Barnen Kär B5 Kaos B6 Destroy Capitalism B7 Svensson Svensson B8 Leonid Var Röd B9 100 Döda Snutar