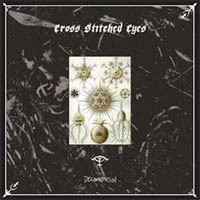 BACK IN STOCK!!! Skuld Releases is pleased to release Decomposition, the second full length by US/UK/German based collective CROSS STITCHED EYES. CROSS STITCHED EYES deep and abstract sounds are works of pummeling sonics. Following in the tradition of anarchist punk and death rock (RUDIMENTARY PENI, CORTEX, and KILLING JOKE), the album's noises embrace the many irrational and visceral shades of music's darkest corners.
Decomposition decidedly rejects traditional copy-and-paste guidelines of musical conformity with a puncturing attitude. The harsher side of CSE's musical work relates to underground art forms because of its close association of the band's artistic influences and it's deconstructed presentation as a whole.
Decomposition's leadoff track "We Follow" evokes reactions to seemingly (un)changing lifestyles and vitriolic diatribes. Other songs like "Animated Corpse" and "Scars Of Past" contain a lyrical depth seldom heard these days. At times benign, at others aggressive, CROSS STITCHED EYES demonstrate the complicated relationship between dark and light that artists continue to examine. Repeated spins of Decomposition are unavoidable.
CROSS STITCHED EYES features members of ZYGOTE, ALARIC, U.K.SUBS, SMART PILLS, ANGER OF BACTERIA and ENDROPHOBIA. Don't judge them by their other activities because they all bring a special component to this multi-national collective. Tim Shapland has produced all of band's recordings with a technique that captures the urgency of their sound. Jason Willer drives the beat and his vocals shape the songs, leading with the direction of an intuitive scavenger on the hunt. Steve Daniel anchors the low-end rhythmic components with an industrious attitude that is uniquely his own. Together as CROSS STITCHED EYES, they have created an infectious LP that will capture and enrapture.