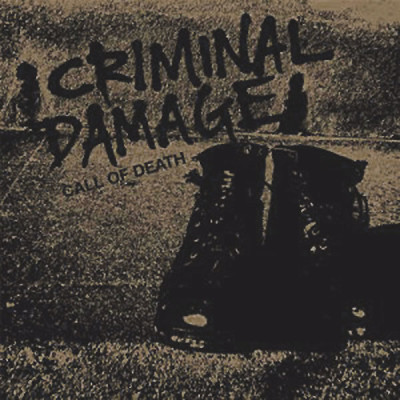 BACK IN STOCK!!! Oi in 2013 is not an easy thing to achieve. It definitely had its heyday in the 80s (arguably still popular in the 90s but in a different way) and has unfortunately since faded out in a big way. I think that this is predominately linked to how high audience expectations have gotten. Oi has always had a simplistic and for lack of a better word, cheesiness: almost pop sensibility to it. It is very formulaic, simple and repetitious, but it is also, when done right, infectiously catchy and fun punk music. While most bands are focusing on becoming more technical and harsh/heavy, there are always a few bands out there looking to revive Oi, and moreso than ever recently it seems. One of the clear frontrunners is Criminal Damage from Portland, who far from riding the coattails of what I see at 2013’s newfound obsessions with Oi-Revival, have been doing it for years now. I was extremely excited when I heard about the prospect of a new Criminal Damage LP, because not only are the first two releases excellent but I was honestly interested to see if they could do it again; Spoiler alert: they did. Before I get into discussing the lyrics, layout, or even the individual tracks on the album, I wanted to talk about the overall sound of the album. If you’ve heard the typical response to Criminal Damage in the past, in particular that they are a intentional Blitz clone, you can go ahead and forget that in regards to Call of Death. On Call of Death, Criminal Damage has definitely found a unique sound. Yeah sure they still sound in similar vein to Blitz, but no longer does it sound like they are trying to write songs that could have be added to Voice of a Generation. The new album is a bit slower, has even more hooks and has actually less leads than anything they’ve done prior. On this record I think Criminal Damage has really come into their own, crafting, to me, one of the most cohesive and enjoyable albums I’ve heard in a long time. At first I wasn’t sure this my favorite record of theirs, but as time goes it grows more and more on me. This LP feels like their most personal record to date, it genuinely sounds as if they put everything they have into making this record, and for that I find this record to be near perfect. Ok now on to the specifics…. I think I’d like to start off the review by talking about the layout of the LP: nothing terribly special, but definitely a good-looking record. I dig the cover, kind of ends up looking like a cross between crust aesthetics and Oi, with the blown-out image of boots, but with a blue-tint where white would normally be. The art is simple but effective. I really like the lyric sheet. Pretty much the typical pocket sleeve insert, but the corners are rounded off, which I think gives the insert a real sharp look. The insert has the lyrics with minimal liner notes on one side, and a blown-out promo picture on the reverse side. As mentioned there is nothing about the layout that is going to make you rethink how bands package their record, but it is a great looking record. Musically speaking, I don’t even know where to begin. If you think you like one song, I can almost certainly tell you that the next track will probably impress you even more. The A side is a total powerhouse of anthem after anthem; every song almost topping the prior track. Call of Death opens with “The Storm”, and I’ll be honest on my first listen I really wasn’t certain I liked what I was hearing. It felt a bit slow and bland, that was however until the chorus comes in. The second the chorus started the record had me on a high that I am still riding (a few months after first hearing the LP). Each listen this record gets better and better, in fact it took me so long to finish this review because I found myself growing fonder and fonder of the LP and I was not quite satisfied with my original assessment. I would like to offer a list of favorite tracks but I am afraid that it may just be a recreation of the entire track listing. I will say that “Hopeless” is probably the song that caught me most off guard. Much like the title may suggest, “Hopeless” is a bleak track, I mean real bleak. While it doesn’t really shake the melodic nature of the record, it has a haunting feel to it. Using an almost gothy crust lead throughout the verse, and a definitely darker chorus, “Hopeless” is probably the least “Criminal Damage-esque”, or maybe even the least Oi song but honestly may grow to become my personal favorite. Just like the A side, the B side pummels through a few more killer and catchy tracks, ending on two of the strongest songs on the album. It may be impossible to only listen to this record once.