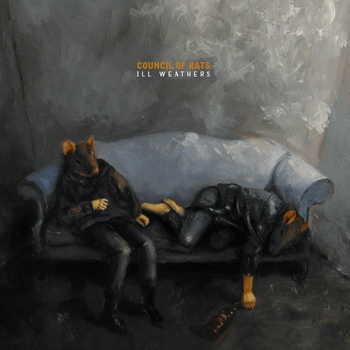 COUNCIL OF RATS is a four piece band from Milan, Italy that formed in April of 2012.
COUNCIL OF RATS features members of SEESAW and LA CRISI.
They play a scathing, unhinged, and venomous style of hardcore. Council Of Rats can loosely be compared to bands such as GLASSES, JUNGBLUTH, NO STATIK, and PUNCH.
After releasing a stellar six song EP in April of 2013, COUNCIL OF RATS are back with their debut ten song LP.
Ill Weathers features ten songs of blistering no-frills hardcore that is impressive as hell.
Seriously, it's completely off the hook and will definitely scratch your hardcore itch.
The record was released by Adagio 830 records on June 2nd, 2014.
As always this label doesn't disappoint.
Highly recommended! Enjoy!