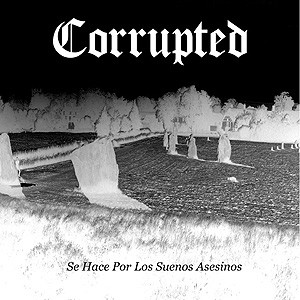 "Se Hace por los Suenos Asesinos" is probably the most sought-after Corrupted album. Released back in 2004 through Japan's HG Fact label, in an initial run of 1000 copies (which sold out within the first week!), this cult album has never been repressed ever since.
With more than 300 people wanting this on Discogs alone, and prices going from 45 up to 100 Eur, Corrupted and Throne decided it was time for a repress.

"There isn't really a band that can compare to the deadly force of Corrupted.
The easily disheartened should avoid the hopeless black sky blocking heaven's view that hovers over the opening track.
The weak willed should stay out of the dark tsunami that consumes and destroys in the latter two.
Listen at your own risk".
— 4.5 / 5 "Superb" (Sputnikmusic) —
140gr. black vinyl, limited to 800 copies worldwide, 350gr. gatefold sleeve, polylined black-inked paper bags, sealed.