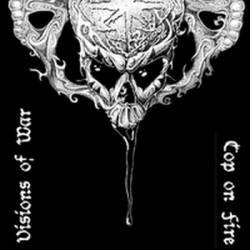 COP ON FIRE / VISIONS OF WAR

Another sexy package of crust with awesome artwork!
Killer crust by two bands, one being Spain's Cop On Fire and the other being Belgium's Visions of War.
Visions Of War even bust out their style of Joan Jett's "I Love Rock and Roll" with a more appropriately titled "I Love Drink and Roll".