Mailorder > 12" > CONQUEST FOR DEATH – A Maelstrom Of Resentment & Remorse LP 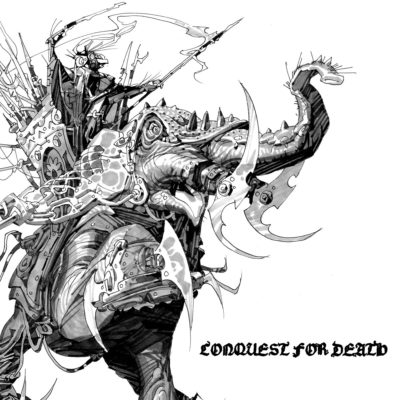 A Maelstrom Of Resentment & Remorse (LP)

After several years in the shadows, CONQUEST FOR DEATH offer their first full length slab since 2013’s Many Nations, One Underground. Breaking from their routine of haste and geographical separation, A Maelstrom Of Resentment and Remorse was written in Oakland over the course of several months following their East Asian tour in 2015, giving them time to fully develop and realize songs while honing sights on the short blasts of fury that have been their signature since the band was born out of an impossible idea more than a decade ago. Razor sharp guitars have a heft that we haven’t heard before from CFD, and the addition of B (SCHOLASTIC DEATH, NO STATIK) on drums has turned their thrash into a battering ram. Dating back to his time in WHN?, and ALL YOU CAN EAT before that, Devon’s words have always provoked thought, but this record shows a reflection that is not always pretty, or even hopeful…and he’s showing us our own faces in that mirror. Doses of frustration to rip the scabs off of still healing wounds, exposing our differences and our hypocrisies with lyrics decidedly more dark than the band’s previous releases, a darkness and intensity that consumes the vocal delivery. But the record is not without hope, far from it, and closes with a two minute sonic montage featuring the voices of friends from all over the world celebrating the power of DIY hardcore in more than fifteen languages. Grit your teeth if you need to, fight through the frustration, because there’s a reason we are still here.