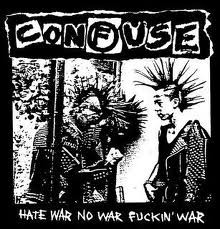 Hailing from Kyushu, Japan from the early 80s CONFUSE is synonomous with Japanese Hardcore across the world. Inventors of the 'raw punk' approach, an hyper-distorted version of the classic '82-brit Discharged punk formula, they ended influencing a whole plethora of latter European hardcore bands like Extreme Noise Terror or Doom, and the whole 90s "...crust" scene. This discography LP features tracks from the "Nuclear Addicts" 7" from 1984, the "Contempt The Authority And Take Off The Lie" 7" from 1985, the "Spending Loud Night" 7" recorded in 1983, their tracks from the "Jisatsu Omnibus" compilation 8" released in 1985, and the "Stupid Life" 12" from 1989, where they evolved into a more melodic, 70s rock inspired style of music, right before disbanding and misteriously disappear.