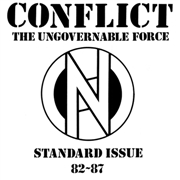 BACK IN STOCK!!!
Originally released in 1989, 'Standard Issue 82-87' presents British anarcho punks Conflict at their most fierce and confrontational with a complete overview of the band's classic early stages. Their extremely pissed off yet melodic trademark sound is here in all its angry splendor: three full 7"s are included, plus tracks from another 7", 3 LP's and a re-recording of their eponymous anthem. 13 blasts total of raging, original and strongly political UK hardcore, the ideal soundtrack to a world falling again into a pit of nationalism and fascist stupidity. Now more than ever, Conflict's powerful protest noise needs to be listened, and loud!