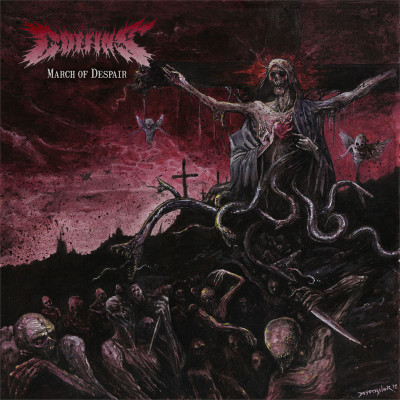 You probably know what to expect from Coffins, this band's been mastering death metal with doom tendencies for long time now! This latest release of theirs kicks off with a couple of energetic tracks, bouncy quasi d-beat kind of rhythms, a catchy opener is always to welcome, I need to be hooked in, especially when it comes to doom... Amazingly the tempo doesn't get too crushingly slow until the middle of the third track, "Carpet of Bones", and "In Bloody Sewage" also pursues further into this slouching kind of pace. But the guitar work is actually pretty animated for the genre, the band slowly but surely peels back layers of mesmerizing downtuned riffs that should definitely stick with you.
The key reference here is undeniably Autopsy, if you want to relive the thrills of an album like "Mental Funeral", this is pretty much the best you can get! Vocals here sound alot like Chris Reifert's obviously with more guttural japanese intonations. I like that this doesn't get too overboard atmospheric, it has its dark, mooy moments but Coffins never forget to rock out! This release is only 5 tracks but the running time is still a pretty substantial 27 minutes. The LP version also contains 2 bonus tracks but these are repeat material, different versions of the 2 opening songs. Artwork is looking good, despite the whole purple tint which isn't my favorite. There's also a nice A2 poster coming with the LP version. Lyrically you'll find your typical heart-warming odes to Satan, human extinction, non-belief in heaven and mass destruction! Plus a nice cover version of Death's "Corpsegrinder". Just one hell of great band!