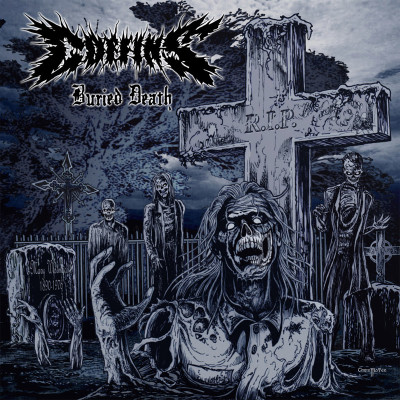 Coffins are evil. They wouldn’t think twice about strangling your grandmother. Maybe they did it already. Head Coffin, Uchino, wears dark shades everywhere he goes, a sure sign that he’s a vampire or at least that he doesn’t have eyes, just gaping bloody sockets. And he eructs through the Japanese trio’s third disc, Buried Death, in this combination croak/growl/burp, so audaciously low and drained of all emotion that it can’t possibly be human. He sounds like Celtic Frost’s Tom G. Warrior died and came back as a 3,000-pound Japanese frog zombie, only twenty times more badass. Buried Death thrives on vibe, though not the Brian Eno-style “atmospheric synths and reverb lend the impression of depth” kind of vibe, more in the “we genuinely don’t give a fuck about you” kind of vibe. “Under the Stench” and “Altars in Gore” exhume simple, repetitive doom/death riffs, usually crawling along with Hellhammer’s lazy bravado and sizzling in a bass-heavy amplifier goo that unites Uchino’s guitar and Koreeda’s bass into a singular, tectonic rumble. Coffins never quite get fast; punkier cuts like “Purgatorial Madness” just lumber a little more quickly. Even the guitar solos feel muffled. In most metal this slow and sludgy, there’s a palpable sense of agony or anger. Not so on Buried Death. Compare “Mortification to Ruin” to any track by Eyehategod. There’s the same mammoth dinosaur riffs and squalls of feedback that can pretzelize guts, yet Coffins sound deader, colder, more apathetic toward the human experience, especially when combined with Uchino’s dispassionate death-belch. Which makes Buried Death more frightening than pretty much any metal record out there. There are plenty of metal bands that write music like Coffins, but none of them are so thoroughly evil.