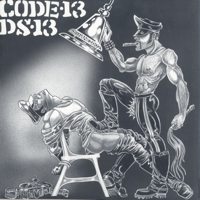 BACK IN STOCK!!! 13 songs of fast hardcore action from Sweden and Minnesota. Each band does six and one half songs. DS 13 plays fast paced 80's influenced hardcore while Code 13 plays fast paced 80's influenced hardcore. In fact you couldn't pick two more complimentary bands to share a 7". This was the last recorded material from Code 13 and saw the band drop the crust/grind influence completely in favor of straight ahead hardcore thrash. This record is out of print, the master plates were damaged so it probably won't be re pressed.