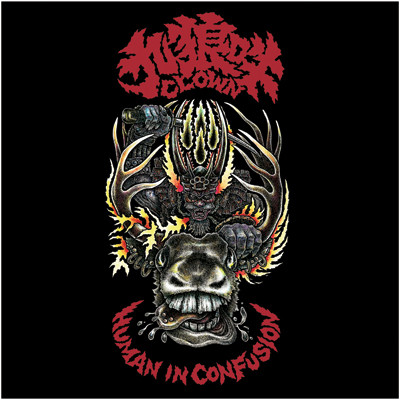 Second full length by this crazy Japanese punk outfit. This is Nagoya City thrash punk thats fun to listen to when youre drunk, and good lyrics to read when youre sober. This is classic sing along style crossover metal punk in the style of Deathside meets Motorhead, leaning more on the Motorhead side. All the Japanese lyrics are translated into English in the lyrics book, and most song choruses are sung in English. Apparently this is their second LP. Nagoya city, one of the cities raised up Japanese Hardcore by world-class level, has 九狼吽(CLOWN) in its core. They play aggressively, and it’s not too much to say that they represent Japanese Driving Hardcore Punk at this time. And this is their newest record. You can be killed with one blow of Mune, a son of Burning Spirits. Agitating shouts of their souls. Shot! Shot! Shot! The lumps of sound make your aggression accelerate and battling spirits fire. Pound! Pound! Pound! A direct new generation of Japanese Hardcore, goes on their own way of hard core laughing social situation! Just feel their boiling blood. Yes! Yes! Yes!