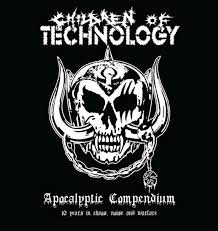 HELLS HEADBANGERS is proud to present CHILDREN OF TECHNOLOGY's Apocalyptic Compendium - 10 Years in Chaos, Noise and Warfare on CD and cassette tape formats. For a decade now, these Italian speed metalpunks have been ruling the post-apocalyptic wasteland with their own brand of crazed 'n' crusty warfare noise. They've put out two critically acclaimed albums through HELLS HEADBANGERS, 2010's It's Time to Face the Doomsday and 2014's Future Decay, and now CHILDREN OF TECHNOLOGY return with a career-spanning collection of singles and splits. Fittingly titled Apocalyptic Compendium - 10 Years in Chaos, Noise and Warfare, this exhaustive 17-track compilation displays the band in all their ragged glory, rushing through nearly 50 minutes of pure, nitrous-infused metalpunk. If one band could hypothetically encapsulate the Mad Max films in both visual and especially musical form, then CHILDREN OF TECHNOLOGY would be it - and here's the perfect introduction to their wild wasteland!