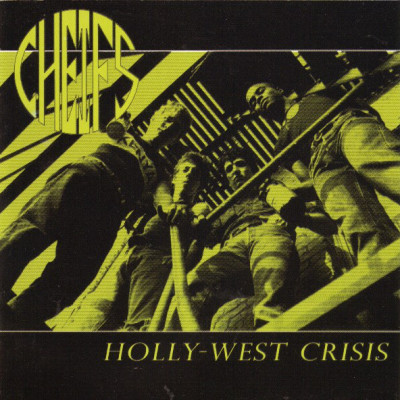 This was an L.A. punk quartet formed in 1979 that, along with the Gears, Keith Morris-era Black Flag, Greg Hetson-era Redd Kross (then Red Cross), and Rhino 39, helped bridge the pause between the original 1977-1978 breakout (Screamers, Weirdos, Germs, X, Bags, Controllers, Dickies, Skulls, F-Word, Eyes, Flyboys, and so on) and the faster, more hardcore style of 1981-1983 Black Flag, Circle Jerks, Adolescents, Social Distortion, Agent Orange, Bad Religion, Channel 3, T.S.O. L., and more. Chiefs Holly-West Crises songs Accordingly, the Chiefs' brand of punk is in the middle of those two extremes, leaning toward what was to come. Chiefs Holly-West Crises album for sale Now here is their lone, rare, smacking Playgems label 7", (which should have led off this CD, not ended it!!!), the best cuts here, plus their four cuts later released on three separate L.A. punk sampler LPs, and six lesser, previously-unreleased cuts from a final 1982 recording, making this a complete overview. Chiefs Holly-West Crises CD music The Chiefs weren't as melodic (or as well-recorded) as the groups they would soon share bills with, and thus seem more run of the mill in retrospect on this CD than they in fact were. Chiefs Holly-West Crises buy CD music In particular, singer Jerry Koskie's gravely voice does little to work tunes out of the sharp-toothed riffs of guitarist George Walker. Chiefs Holly-West Crises songs But there's still no denying an energy and excitement that so well defined the time, and this collection at its best still cooks: cut straight to tracks 11-13, then work your way back. ~ Jack Rabid.