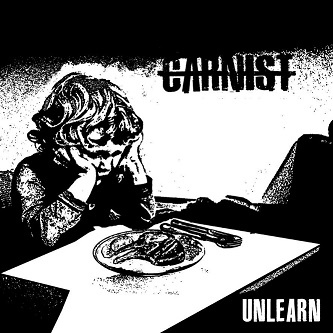 What happens when a group of close friends who are bonded by a deep friendship, a highly socially-aware anger and an interwoven web of strong progressive beliefs decide to play loud, angry, abrasive and blown out hardcore punk as a vessel for the expression of radical and extreme vegan, pro-animal rights, feminist, anti-patriarchy, anti-religion, anti-misogyny, anti-homophobia, anti-transphobia and anti-speciesism ideals?
Well, what happens is that in seconds you end up enveloped in a shit storm of rage that has seemingly no end, nor shows any kind of willingness to loosen its vicious, mauling attack on your sorry throat at any time, and that will stop in front of nothing in order to get its message across. And that’s what CARNIST‘s music is all about. Being pissed to no end about a multitude of social matters, and therefore being pissed in an exponential kind of way, in a million different directions.
End up in this album’s path and the only choice you have to stay alive is to embrace its message, otherwise get the fuck out of its way or the damn thing will flatten you like a worm under a steam roller.
Carnist are a highly political hardcore band haling from London, who feature members of Shels, Plague Mass, Unquiet Grave, Momentum, Light Bearer and Fall of Efrafa. Their music is a hardcore attack that has neither mercy nor pity, and aims to rip through your fucking face with the force of a tomahawk launched straight at your head from four fucking feet away. It will get its message through any thick head, whether you want it or not, because to them, this shit is REAL, and you can feel that in every note and scream of the album.
“Carnism” is the “invisible belief system, or ideology, that conditions people to eat animals”. On the other hand the title of their debut album, which is called Unlearn and that you can stream herein, deals with the concept of “unlearning societal norms and cultural traits which are contrary to our nature – be that our attitude towards non human animals or indeed humans who do not fall in line with stifling, archaic and claustrophobic ideas of what it is to be human”.
Needless to say, the music just fucking overboils with anger and destruction, and the whole work is just an endless stuffing of blistering and mauling shards of pissed off socially aware hardcore belligerence that second after second pours out of the speakers with the force of a full blown fucking riot. DROPDEAD, TRIAL, PROPAGANDHI, INFEST, SIEGE, VOID, CRASS, CONFLICT, PROTESTANT, SLAPSHOT etc. are all influences – so you get the idea – and the album also features Guest Vocals by Matthew and Lee (LIGHT BEARER), Jasmine (NEOCONS/NO BABIES), Anna (AMBER) Michele (GOTTSMORDER), Oskar and Erik (MONACHUS), etc.