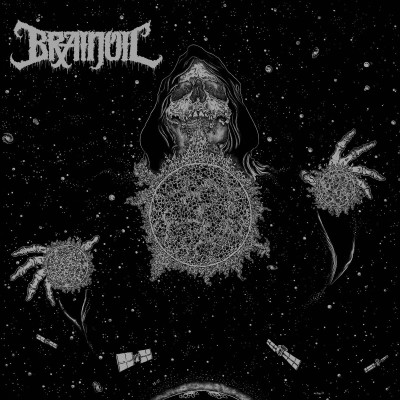 This is it: the best sludge metal album you’ll hear all year. Singularity to Extinction is Brainoil‘s first album since 2011, following a rarities comp that same year and a split with Dropdead in 2014. The Oakland-based trio aren’t afraid to change up their tempos, varying from the more upbeat “Preface to Madness” to the miserable, crawling “Blank Static Void.”
Singularity to Extinction is swathed—or maybe drowned is a better descriptor—in raw, abrasive crust. Walls of guitar backed by sluggish drumming wash over the listener and Greg Wilkinson barks out vocal lines like he wants to cough up blood at the end of a recording session. Describing Singularity to Extinction as misanthropic would be an understatement; abrasive guitar tones and vocals combined with glacially slow tempos put Brainoil’s latest in the same league as Dystopia, Grief and Noothgrush.