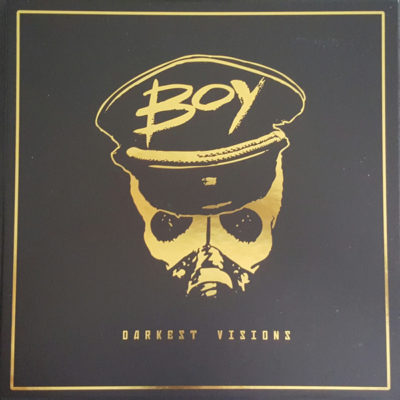 Back in stock!!! Imagine a mix of The Angelic Upstarts and UK Subs with an equally potent blend of Rocket From The Crypt and Turbonegro, and you have a sense of Czech punks Boy and the body of their outstanding debut album Darkest Visions. Fusing old school British punk with a touch of glam and raw rock ‘n’ roll, band and release make a dramatic entrance to a worldwide market with their Rebel Sound/Voltage Records released rampage. It is an encounter which has a welcome familiarity to its brawl but just as strongly a unique breath and substance which marks out Boy as a band with a potentially mighty future within the world of punk rock. The band name suggests wishy-washy media friendly teen pleasing blandness, what you get is raw antagonistic punk rock of the finest order.

There is little we can reveal about the background of the band with any available bio offered in Czechoslovakian, but they are a quintet from Brno who have previously released a three track 7” EP via Voltage Records last year and before that had a track on the 2012 compilation Brno stále v plamenech(Brno Still In Flames). Their new full-length is produced by Turbonegro’s Tommy Akerholdt and features numerous guests including Ronnie King (who has worked with NOFX, Rancid, Offspring, Snoop Dog) on piano, Shawn Smash (Total Chaos) on guitar, Daniel Marusack (Chancers) on flute, Theresa Kovalová(Calm Season) on cello, and Martin Maleček (ex – Centaury ,SRK) on conga. That piece of info alone tells you the flavoursome design and sounds bursting from within the punk bred tempest, though the album starts off with a more straight forward belligerent sound.